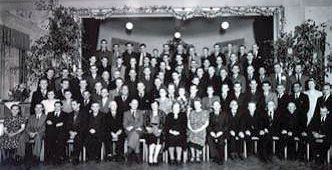 In 1950 the Frankenberg company marks its 60th anniversary. In 1952, the company is nationalized after Arthur Reinhold and Kurt Hofmann had been accused of economic crimes by the arbitrary judiciary of that time. Arthur Reinhold dies of exhaustion suffered during his imprisonment in Bautzen. The firm’s name changes to VEB Walzengravierwerk Frankenberg/Saxony.